My editors reported that there appears to be an issue with my word count on the post edit page. Testing this proved true, check the word count: 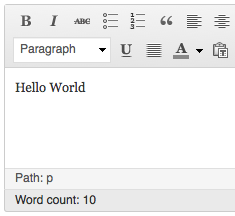 This is affecting all posts, for instance, a post with around 1600 words shows as 8000+ words.

My question is, what can be the cause of this? How do I troubleshoot this and find a solution? Is anyone else experiencing similar issue on Wordpress v3.5.1? I am baffled...

Update: Appears it calculates characters (instead of words). It sums all letters without spaces. It doesn't count periods or other symbols either. Now, this is getting obscure.

Update 2: The perks of moving servers. Once moving server, I could start debugging this issue on the old server to find the cause. So I deactivated all plugins, same problems. Finally, I found this code hiding in the theme of which I used as a template:

My question is, what would be the purpose of this code? I suspect that it was not intended to conflict with the word count on the post edit page.

Browse other questions tagged post-editor count bug or ask your own question.