Wordpress "Site Health Status" trust it or myself for its security advice?

I'm using WordPress to host a few sites. Lately it includes this feature called Site Health Status. This information has in part been valuable, but it also itches me the wrong way somehow that I can't get it to show "green" due to something I'd consider non-issues 😉

Here is how the "critical issue" looks.

Here's the relevant text excerpt, because search engines aren't all too good with indexing text from screenshots:

Background updates are not working as expected [Security]

Background updates ensure that WordPress can auto-update if a security update is released for the version you are currently using.

The folder /vhosts/sitename is indeed under version control and the actual blog is under /vhosts/sitename/blog and that's what the web server serves as webroot. However, /vhosts/sitename/wp-config.php contains the blog configuration. As WordPress allows it to live outside of the webroot, that's what I opted for out of security reasons. Anyway, the conclusion from this first (yellow) point should be that there's no way anyone could glean the contents of the version control system, since it lives entirely outside the webroot.

The second (and red) point is about FTP credentials. This one I find particularly unnerving. I have scripts in place, I have 2FA, and the servers in question are only accessible via SSH (and by extension SFTP). WordPress doesn't support SFTP nor would I want to enable this at all. In fact the files inside the webroot have tight file modes so that even in case a breach occurred very little could be done. In other words, I am updating WordPress in a semi-automated fashion triggered manually. Unlike some setups of WordPress I have seen or administrated in the past with FTP enabled, I haven't had a breach, going by all the indicators I have available. So to me this is the desired setting. But someone decided to categorize this as a critical issue.

So my questions (two actually):

NB: I am not interested in having the overall feature (or the visible widget) removed. I simply want this feature to be valuable and that means not raising the alarm when nothing is wrong, as far as I'm concerned.

After setting define('FS_METHOD','direct'); in wp-config.php - as per recommendation from the one answer at this point - the message changed, but still shows as critical issue 🤨 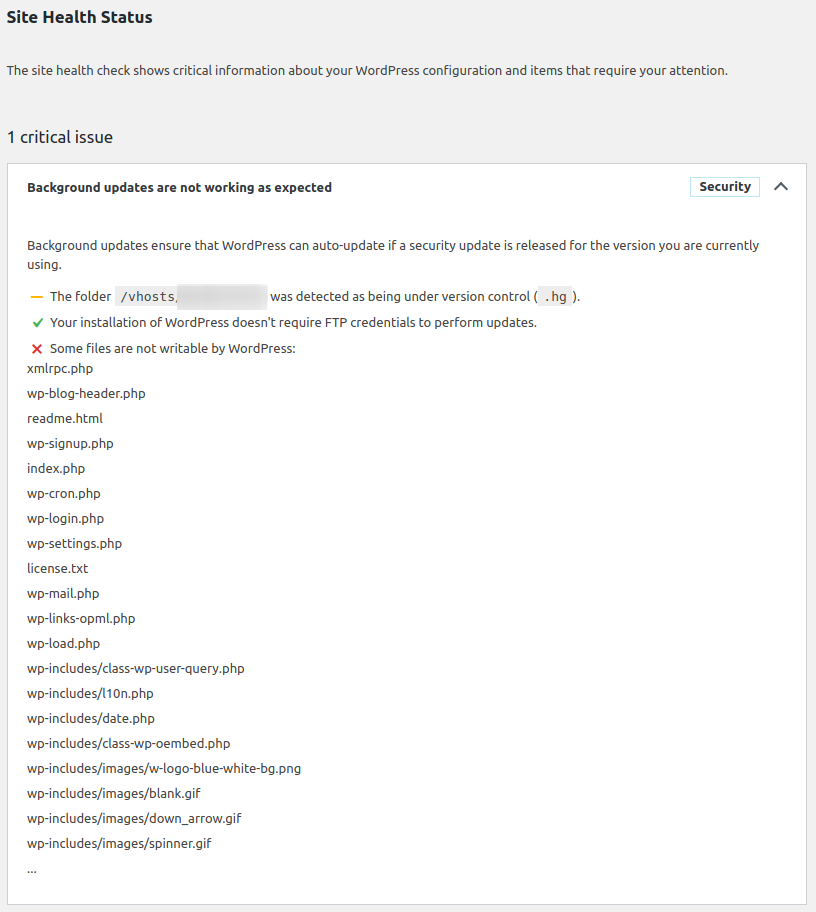 You can get the list of tests from the WP_Site_Health->get_tests() method in class-wp-site-health.php file.

I have not tested this, but this post suggests that not having a FS_METHOD setting in wp-config.php is leading to the second warning. To fix it add this line to wp-config.php:

For the version control message, a bit of exploration found that this problem is actually poorly described as the actual result is that Wordpress will not apply updates automatically to files that it thinks are under version control. See https://github.com/WordPress/health-check/issues/323 .

There is a plugin that enables you to turn off specific Site Health Monitor alerts without disabling it, but it doesn't appear to support the version control message yet.

Not the answer you're looking for? Browse other questions tagged security site-health-widget or ask your own question.

152
Is moving wp-config outside the web root really beneficial?
4
How to remove the site health dashboard widget?

8
Will there be security updates for 3.1 once 3.2 is released?
110
Verifying that I have fully removed a WordPress hack?
1
How to improve WordPress security by hiding non public facing files?
2
About WordPress site security
0
Secure Multiple WordPress Installations on shared hosting
0
How are readers authenticated for leaving comments?
1
Definitive wordpress directory ownership and permissions on linux
0
wordpress security (only one part of the site)
1
wp-config.php being written by attacker
2
Critical Site Health Issue after WordPress Migration