I am looking for a solution to get the latest list of custom parent posts.

The bold list items are the posts/pages I want to retrieve.

And finally, I want to get the list of the last posts of the parent category to display on the home page

example: I have the list as the image below. 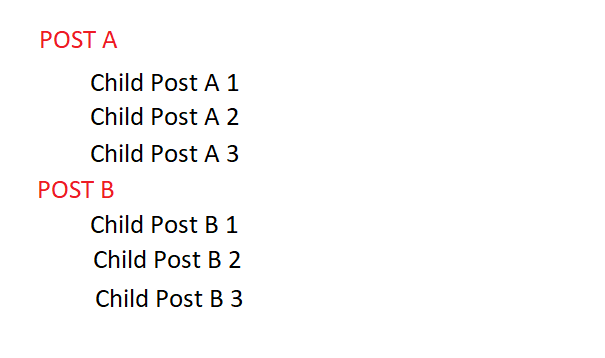 I want to display in the loop in the home page

Thanks for all the help / I used google translate tool to describe :D

First off, adjust your query so you're only returning top level posts (the parent posts in this instance)

This will return only the top level posts.

Then, inside the loop, you can use either get_posts() to get the children of said post (returning the most recently posted):

or use get_children(), which works in a similar way to get_posts() with similar arguments. Once you have your child post, you can output whatever you need to from it.

Either one of those approaches will return an array which you can then pick apart to get the information you need.

Hopefully that gives you something to start playing around with, I'm sure there's more than one way to do what you're after but that's how I'd start to approach it.

Not the answer you're looking for? Browse other questions tagged wp-query or ask your own question.

1
Get latest 3 posts from multiple CPT in one query
7
Return parent post with its children using WP_Query?
2
Parent / Child formatting in a list of post of a custom post type
0
How to Create a Random List of Child Pages
0
How to display a list of posts in same child category as current post
2
Display children and grandchildren of a custom post type
1
How can I pick a single post from the latest 3?
0
Proper way to display latest 5 posts grouped by post type?
0
How to show specify category template for both parent and child category