Step to reproduce the issue 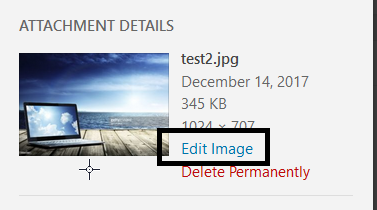 You would add this to your theme functions.php file if that's what you wanted to occur - if you were happy with index number generated and added to the original image, and were happy with the complete source set being governed by the edited (re-scaled) image. It happens to leave the original upload and its set in the folder. (Adding an optionalized "cleaner" operation is something I haven't gotten into, but there are plugins that will clean up unattached/unused images from a folder already - one could be applied on a semi-regular basis.)

I have not tested it for possible unwanted additional interactions. In most installations, it wouldn't hurt, might even help, though I can imagine some circumstances in which you might NOT want all image edit actions to "regenerate thumbnails" (which probably ought to be named "regenerate source set"). For those installations, you'd obviously want something more refined.

Though a little more clarity on the initial question and how exactly to reproduce it would be helpful, I believe the answer is something along these lines:

When you upload an image, WordPress will upload the full version of the image, along with the normal set of thumbnails. If you scale the image, it will also create one specific variation, with the random number addition. So, on one installation, when I upload an image as post featured image and proceed to re-scale it, I get the following in my Uploads folder: 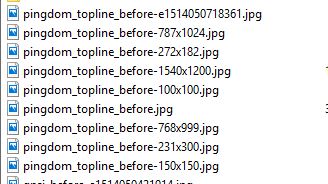 So, in scaling the image on upload, I create a new "full" version of the image - with the "random" code added to the original filename, and, since I was uploading it as a Featured Image, it is now also slotted as the 'post-thumbnail' image.

This can also be verified using wp_get_attachment_image_src(), which, for "full" on the above, returns:

If you wanted to get a 150x150 (or whatever is set for you installation for thumbnail) version of the scaled image, you'd have to either:

1) upload the scaled image separately, and let WordPress generate the test-image-random-150x150.jpg for you. or

After such a regeneration action, my uploads folder shows the following:

Note that the original image set is left unaltered in the folder.

Creating such a re-generated image set would be the preferable method especially if you intend to use the scaled image for other purposes, since re-uploading it and letting it generate the full source set of images appropriate to your installation will help with responsiveness and consistency.

To achieve those purposes, you'll need a custom function (such as the one provided at the outset of this answer), and a more complex, optionalized implementation might be worth considering, even though I'm not convinced it would be used very often. (When I want to scale an image to particular dimensions, I almost always do it separately from WP, and give it a name that makes sense to me, but I can't speak for others.)

If you wish to get a complete source set of images (relative to the new scaled image), and don't wish to re-upload the new scaled image, or rely on the function to do it for you whenever you edit an image in the Library, you can use Regenerate Thumbnails or similar plugin. Finally, you can also crop (or false crop) the image to produce the set of thumbnails.

This last one is easy to execute: In addition to re-scaling the image, in "edit image" you can use the cropping tool to produce a virtual near-copy of the original - and WordPress will produce the full source set when you save the image. I say near-copy because in tests the editor will not let you completely save a "copy" actually identical to the original, but at this point I have no choice but to examine the code in detail if I want to understand, and that's something I'll leave to another day and maybe write up somewhere else - unless someone else comes along with the full briefing first.

1. When you first upload an image, WordPress creates a set of thumbnails based on the uploaded file.

2. If you simply re-scale the image, it will produce a single unique scaled image, with a generated filename based on the original name, with the addition of a "random" element (actually a heterogeneous index number)

3. If you re-upload the new scaled image or if you regenerate thumbnails - using a custom function, a plugin, or an editing trick - you can produce a new set of images based on the scaled image, using the generated filename.

Use post-thumbnail instead of thumbnail. Your final code will be get_the_post_thumbnail($post, 'post-thumbnail');. Please refer to this link

You may want to try adding IMAGE_EDIT_OVERWRITE constant in your wp-config file to force WP to purge old images and use new ones.

Function wp_save_image() is what processes the image and it is called by wp_ajax_image_editor() which is the AJAX handler for image editor AJAX endpoints.

You can read more about how it works in file /wp-includes/image-edit.php or browse it's source code online @ https://developer.wordpress.org/reference/functions/wp_save_image/

However, I'm still not sure if this is really an issue,

So result is pretty much the same either way :)

You have to add the appropriate image size in your theme's functions.php file

400 is width, 99999 is height, false is do not crop. This must be "after" add_theme_support(post-thumbnails); so find that and place the above code after it.

You don't have to regenerate all your images... just re-upload the ones you need. Optionally, the Regenerate Thumbnails plugin (https://wordpress.org/plugins/regenerate-thumbnails/) adds a link to each image in your media library to regenerate that particular image.

Then call your thumbnail with the_post_thumbnail('my_post_thumbnial');

Not the answer you're looking for? Browse other questions tagged images post-thumbnails or ask your own question.

0
fitting the thumbnail image into a div
0
How to use the thumbnail size with catch_that_image
0
wp get attachment image always gives me thumbnail
1
How to scale image with equal width and height without distortion?
0
How To Pick Custom Size Of Uploaded Image In Theme Via the_post_thumbnail();?
1
Wordpress returns old thumbnail size after changing media settings
1
Wordpress resizes image to the same size as uploaded
1
WordPress PNG compression issue