Reblog from Tumblr to Wordpress

If you have a Tumblr blog, you can 'reblog' from other Tumblr blogs, much like a trackback. I follow a couple of Tumblr blogs and sometimes want to quote from those websites. And, on these Tumblr sites, there is a 'notes' section for each post listing each 'reblog'. So my question is: is there some WordPress plugin (or some workaround not requiring a plugin) that will allow me to 'reblog' from a Tumblr site to my WordPress one and have it show up in the 'notes' section of the Tumblr blog?

My site is a wordpress.org blog, if that makes a difference. And I am running WordPress 3.0.1.

I just did a quick search on the Reblog concept because, admittedly, I've never used Tumblr and had no idea what you were talking about. After reading a bit about it, it started to sound very familiar ...

Most blogs today allow you to add a ReTweet (Twitter), Like (Facebook), or Share This (Generic) button directly on the post. These are very network-specific and key in directly to the APIs of various social networking and crowdsourcing applications. Tumblr, since they run a succinct network of blogs, did the same thing. The Reblog button allows you to quickly repost content on your own site within the Tumblr network. As one site mentioned, not very extensible, but still pretty cool.

The difference is, each self-hosted WordPress blog is its own web application. So there's not really any way you can have blog authors put up a "share on your own self-hosted application" widget on their sites. Fortunately, there is a solution.

Some time ago, WordPress introduced a bookmarklet called Press It. This was a snippet of JavaScript code that lived in your bookmarks toolbar and allowed you to quickly and easily re-post interesting content you found online to your own site. As of WordPress version 2.6, the feature has been replaced by Press This, a similar bookmarklet that allows you to

create a post by quoting some text, images, and videos on any web page.

To use Press This, go to your Tools sub-panel and drag the "Press This" link into your bookmarks toolbar.

When you're browsing the Internet and you find something you like, highlight the text (or don't and you'll use the entire page's content) and click the Press This bookmark. A pop-up window will appear allowing you to instantly edit and post the content you're viewing. 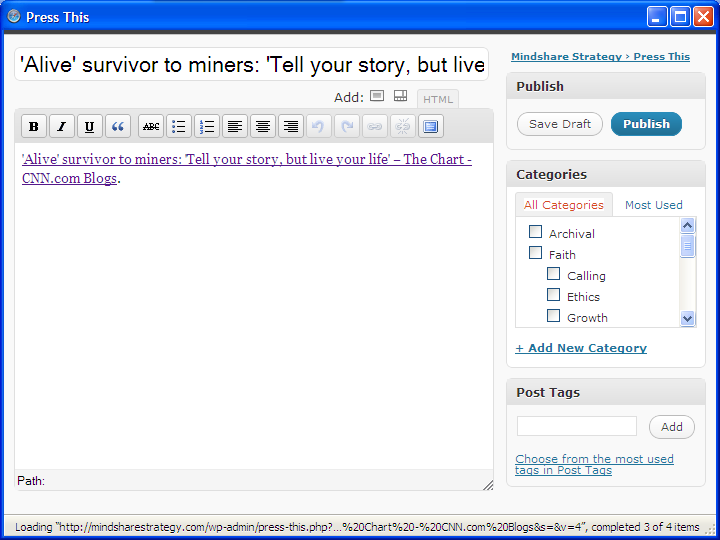 As far as showing up in the notes section of a Tumblr blog, that's an entirely different issue. You're looking for a very specific, custom integration between two different platforms ... I have found one plug-in that will automatically post to a Tumblr blog from WordPress, but the last time it was updated was April of 2008 so I'm not sure it'll be too much help. There's also a synchronizing system called Tumblrize that will automatically post your WordPress content to Tumblr, update it when you change things on WP, and update the WP copy if you change things on Tumblr.

Not the answer you're looking for? Browse other questions tagged plugins tumblr or ask your own question.

5
How can I migrate from another platform to WordPress (using the same domain) and launch when ready?
1
"Members only" section of a WordPress site - self signup and no backend access
1
Moving a blog from Tumblr to Wordpress
3
Network-Wide Plugin Settings Management
1
User Signup in Multisite - Need Plugin or Advice
6
Wordpress Queue like Tumblr?
1
How create Group Blogs based on user created Groups
0
Using custom code, how can I fetch data from the WordPress plugin repo?