How can I add the ability for a user to add/edit administrators?

I created a new user role called "developer" and I gave it all of administrator's capabilities:

This works great except I'd like Developers to be able to add/edit Administrator users. However, when I add a new user, "Administrator" isn't one of the options in the user role dropdown list.

I tried having the editable_roles filter return all of the roles in the system, so that the Developer can add/edit all roles:

But when I do that, the roles dropdown list only shows the 1st letter of each role (they have a custom set of roles and this is showing the first letter for each one): 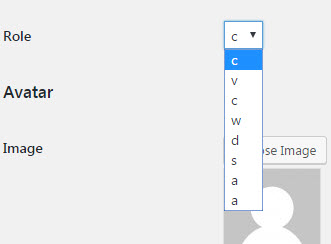 I also tried simply appending 'administrator' to the $roles returned from the editable_roles filter, but it - predictably - just added an item with 'a' to the dropdown list.

Anyone know how I can make this work? (Note that I'm not on multisite so I don't think there's a super admin role I can hook into here)

Make sure you're adding and removing roles on plugin activation/deactivation.

add_role() only adds a role if it doesn't already exist. So if you already added the developer role without the capability to add administrators, calling add_role() again won't re-add the role. You have to remove the role first.

Deactivate and re-activate your plugin and the developer role should have the same capabilities as the administrator role.

Not the answer you're looking for? Browse other questions tagged user-roles or ask your own question.

2
similar to Editor can create any new user except administrator
5
How to enable a site administrator to edit users in a WordPress network/ multisite setup?
3
How to assign capabilities to user NOT to User Role
0
How to add only a (sub) capacity to an user role?
0
When using a user role editor how to find out any plugins' or themes' role?
3
Do custom user roles have any default capabilities?
0
allow user to edit posts made by others users based on the user role
2
How to allow "Add New" capability of CPT when links to its UI are placed as a submenu?