I'm trying to hook up some JS so that when the featured image upload box is opened and an image selected I can use Vibrant.js to analyse the colours of the selected image. The hurdle I've encountered is that I can't find any particular event to bind my function to. I've looked at various tutorials regarding the wp.media() object, but they all seem to involve replacing the upload box completely. Is there no straightforward way of detecting when the featured image upload window is open and the selected thumbnail preview image is loaded?

After some digging I discovered that wp.media.featuredImage.frame() was what I was looking for:

The end result was that once the featured image modal was opened, it would fetch an uncropped version of the selected featured image via WP-JSON, extract the a palette of colours via Vibrant.js, and then add these as a colour picker to the modal. This let's you specify a particular colour - taken from the image - that then gets used by the theme as an overlay for that particular image. A picture explains this better: 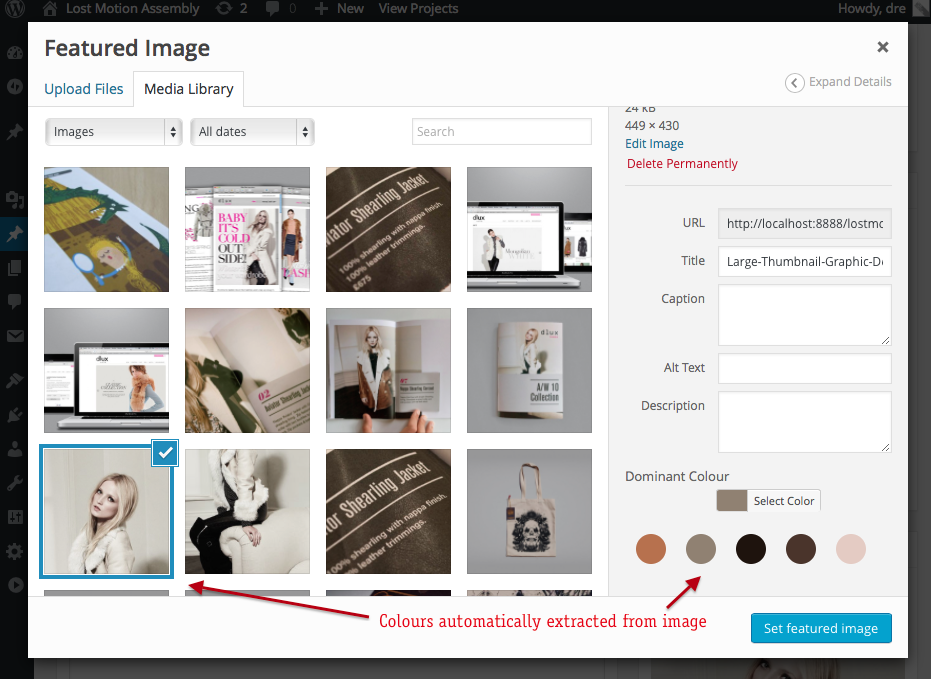 You can also do the following (it will also fire on the regular media modal):

btw, I got this snippet from Dekode

4
Creating a metabox to upload multiple images, Ignoring The Featured Image
5
Is it possible to trigger some JavaScript when Media Popup is opened?
5
Differentiate Featured Image from Post Images upon Upload
1
Insert Image automatically when upload finishes wordpress media uploader
0
tb_show not showing a media upload window . custom plugin
0
Create featured image from a remote url when creating a post