The WordPress Theme Customization API indicates that there are a number of existing pre-built customizer sections available for the theme developer.

If you want to use any of the existing, built-in ones, you don't need to declare them with add_section(). Instead, refer to them by name. The following sections are built-in:

Refer to them by name? Huh, what does that even mean? To understand this more, I created the simplest theme on the planet. Here's my style.css:

That's the entire theme. There is no functions.php file.

When I went to the wp-admin panel, Appearance --> Customize I get the following TWO (out of six possible) sections displayed: 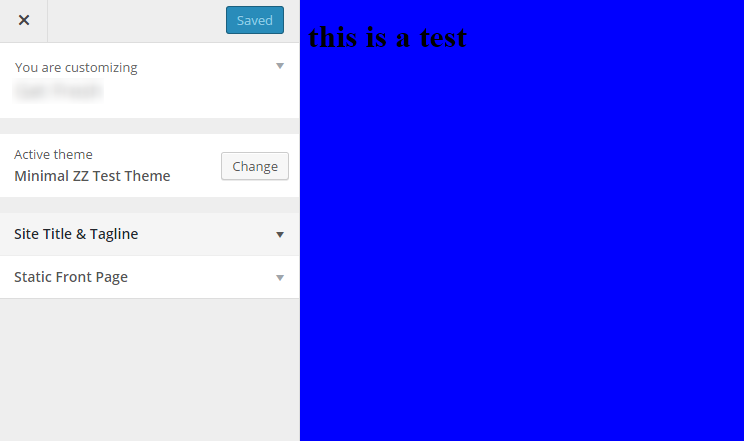 How does one "refer" to the section by "name"? What pulls the canned choices into the wp-admin customize panel? And my real question is: how can you hide a pre-existing choice when overriding a theme (with a child theme.) We definitely don't want our future admins the chance to change things they shouldn't be. (Yes, I know we can utilize the admin permission system to hide elements, but that's not my question...)

Anybody been here before? Many thx.

Here's my exact situation. I do lots of websites, often using a child theme to modify an existing theme that gets me sorta close. I'm looking for a very simple, non-bloated bootstrap theme. I found devdmbootstrap3 which I'm pretty impressed with. The only problem is that theme generates a bunch of customization selections that we don't want to display (colors, header image, background image). I can't figure out what populates those elements. There is no add_section() calls in the functions.php file. I've been thru that file (and the entire theme, including theme-options.php) pretty carefully. Again, I think my issue is not understanding the words "refer to them by name". I just don't see where those items are called.

Hmm.. as I think about this, I can certainly install wordpress core and that template inside a localhost server, then step thru the code debugger style to find what call actually creates those elements. Ugh.

Any other ideas? Again, thx.

To remove these default controls, use your own handler on customize_register with a later priority, so that it runs after register_controls() has added them:

Not the answer you're looking for? Browse other questions tagged theme-customizer or ask your own question.