Is there any tool out there for seeing a list of all the loaded plugins and how much time they took to load? Looking to analyze plugins effect on my site's performance.

There are a lot of tools available

Below are my personal favourites

Daniel, it appears you're focused on the specific challenge of profiling plugins installed at the same time on a WP install, which doesn't appear addressed in the other answers so I thought I would chime in.

At Comit Developers, we've had a lot of success with P3 - Plugin Performance Profiler. I also like a lot when I'm just working on stuff on my own laptop, but moistly I'm worried about my own custom plugins when doing that and I find if you just need to analyze a single plugin, Z-Ray is usually faster...

I will confess we've become a bit spoiled with Z-Ray and P3 isn't quite there yet, though it's a very solid WP Plugin with a strong feature and bug fix release schedule history (official GitHub mirror) and that's not something you see in a lot of WP Plugins. 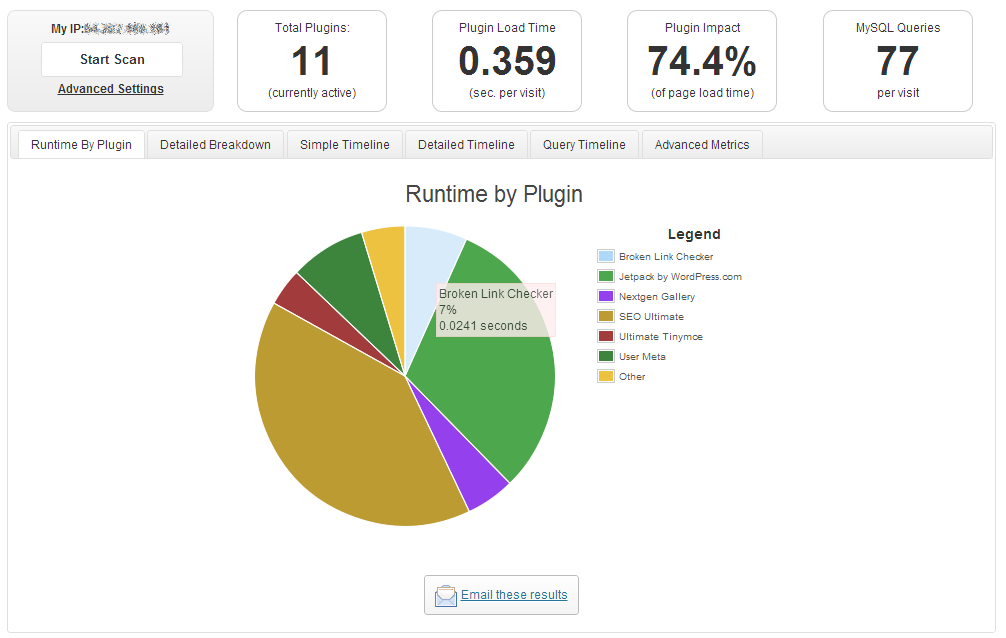 1. Native support for manual WP Plugin Installation method only: Not really a deal breaker for most since few WP plugins have native support for Composer or any other system like that. This is easily manageable with Bedrock Plugin Control. Frankly. there are enough other advantages to using Bedrock from roots.io for enabling a 12 Factor WP Platform that it's probably worth using anyway and WPGear has even more options listed. I did notice there a was an absence of my favorite IDE on WPGear, perhaps we see about getting it listed? Another thread, of course ;)

2. Issues with SOME Advanced PHP Feature Support Reported: We haven't seen this particularly on ZS7 or ZS 8, but some users on the HGV GitHub Issues list have reported issues with OpCode caching and this plugin with HHVM, so there's a chance at least that you may have to tweak some of the settings if using Optimizer+ or perhaps if running older php runtimes that are using apc.

3. Static Low-Interactivity Reports: The reports are well laid out for both technical and non-technical users, but they're basically static images and summaries and not dynamic nor do they offer in-depth technical features like drilling down into compositional sources of the data.

None of the drawbacks are really deal-breakers in my opinion though others may disagree.

We've been using the WordPress Z-Ray Extension for Zend Server more and more each day and although I was kidding (sort of) about becoming spoiled, I have noticed every dev on our team has raised the bar for what we consider good reporting and debugging plugins...P3 is better than anything else I've seen and surely better than using Chrome Devtool or Firebug in a browser, but we'd be more interested in a way t enhance the WP Z-Ray Extension to add in support for multi-plugin profiling. See you on GitHub!

Not the answer you're looking for? Browse other questions tagged plugins performance debug or ask your own question.

3
Do Plugins effect site loading time?
0
Minification Plugins break my website
0
How to test site speed?
2
What other plugins are there available to track app performance for wordpress?
0
What are the performance hiccups when building plugins?
0
how to prevent all css and javascripts files from loading
1
Making a plugin “Suite”?
2
Performance impact of using functions in WordPress?
0
What Is The Best Method/Tool To Investigate WordPress Internal Performance?