When started blogging, I was not aware about the image file's size, and used a lot wider and sharper images without necessity, some of the files are even 5-7mb in size. As there's no such necessity to using such a large file, even the end-user have to wait for a long time loading such images.

I know I can replace images via WordPress Media Library, but to replace images, I have to upload a new resized, squeezed version of the image to the server and then to delete the older one. Now I got another nice solution — using the Media Library Image Edit option: 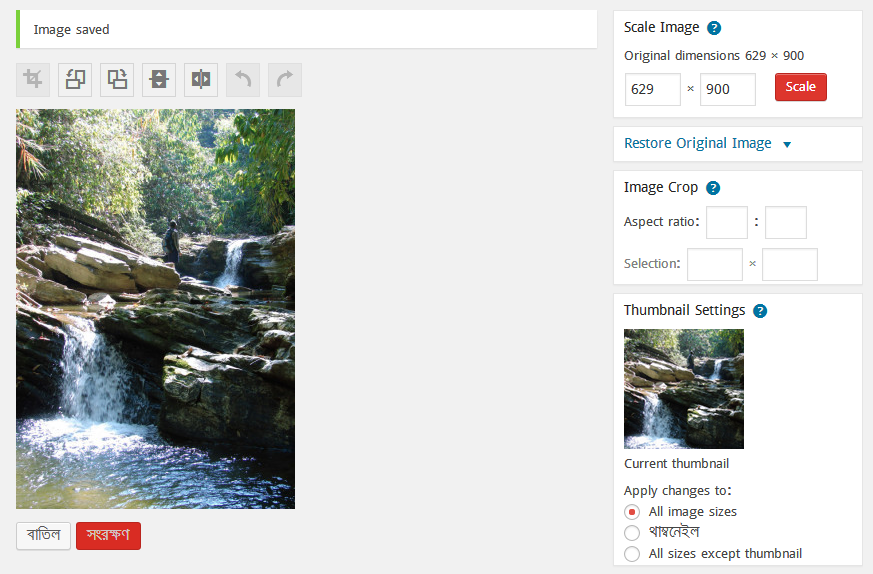 But, I was actually doing it to reduce the file size (with its dimension) to make a big difference in the occupied Server Disk Spaces. But after the rescale there's a dropdown panel on the right saying:

Restore Original Image
Discard any changes and restore the original image. Previously edited copies of the image will not be deleted.
Restore Image

But I's actually trying to replace the Original with the newly scaled image. Is that possible?

The problem is, after the rescale, I can easily delete the Original using Cpanel, but isn't that cause many other db path errors and db errors that, the Original file is missing?

I'm actually in an unanswered and uncertain state, I'm afraid. :(

media images
Share
Improve this question
edited May 1 '14 at 7:39

Depending on the number of images, its probably a good idea to manually download them and run a batch script in photoshop to resize them all. Then re-upload them copying over the files in use. This plugin, Regenerate Thumbnails, may also help

You will need to find images manually under uploads folder and replace them one by one with same name and compressed version, there does not seem to be an option in admin panel to replace existing images.

Also Regeneration of all thumbnails will be necessary, Regenerate Thumbnails plugin will be useful.

Enable Media Replace is useful to replace physical files in the media library.

Not the answer you're looking for? Browse other questions tagged media images or ask your own question.