quick question. I'm using jquery for my current project (the latest release). A few plugins I'm using are using jquery as well and they are inserted through wp_head(). Since I want my website to ber fairly slim and fast this redundant scripts should be removed.

is there any way I can filter for the string "jquery.js" in wp_head() and remove the tag that embeds the script? As you can see in the following screenshot jquery.js wouldn't be needed. Can I remove that with a hook? 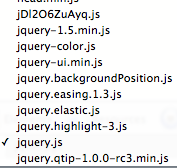 There's no filter that covers the entire output produced during wp_head(). You would have to use a fairly complicated process of output buffering starting before wp_head, then filtering out what you don't want afterwards, before releasing the buffer.

Lets assume that you're dealing with plugins that have registered their scripts properly> Try adding this to your functions.php and then viewing source of one of your pages:

That will list all the scripts actually registered, and their dependencies.

If what you want to deregister is in that list, and not being called as a dependency of another script, the easiest thing to do is just call wp_deregister_script with the handle listed here.

Most likely, though, you're dealing with a case where a plugin didn't follow best practices in adding a script. What it looks like from your output is that some plugin added jQuery 1.5 without first deregistering jquery and reregistering it with the different version. so anything that depends on jquery is forcing an include of the version bundled in WP.

You can use wp_deregister_style() and wp_deregister_script() to clean up overly aggressive Plugin script/style injections. For example, here's how I "optimize" Contact Form 7's style/script injections:

If you know which Plugins are the culprits, you can use a similar approach.

Yes, you can disable specific plugins or scripts form appearing.

Not the answer you're looking for? Browse other questions tagged jquery wp-head customization or ask your own question.

0
How can I style a certain element only when wptouch is active?

5
How to control what jQuery version to include, with wp_enqueue_script
0
Remove swfobject.js in wp_head()
0
jquery does't work
5
How to prevent wordpress from loading old versions of jquery in wp_head();?
0
jQuery Live Form Validation in Wordpress
0
Foundation Scripts not loading (custom theme)
0
Remove snippets of JS from core
0
Move Jquery.js to Footer